Useful Tips on Your Irish Wolfhound:

The Irish Wolfhound is a very old breed. They are suspected to be developed in 1st century BC as they are mentioned in some Roman writings from that period.

Irish Wolfhounds are an ancient breed that originated in Ireland, where they served as both a war dog and hunting dog. They came close to extinction in the 19th century after the great prey animals — wolves, deer, and wild boar — had largely disappeared in Ireland, but the breed was revived and today is a wonderful companion who draws the admiration of many.

Physical description of an Irish Wolfhound: The Irish Wolfhound is a giant-sized dog, one of the tallest breeds in the world. The head is long and the skull is not too broad. The muzzle is long and somewhat pointed. The small ears are carried back against the head when the dog is relaxed and partway pricked when the dog is excited. The neck is long, strong and well arched. The chest is wide and deep. The long tail hangs down and is slightly curved. The legs are long and strong. The feet are round, with well-arched toes. The wiry, shaggy coat is rough to the touch on the head, body and legs and longer over the eyes and under the jaw. Coat colors include gray, brindle, red, black, pure white or fawn, with gray being the most common.

Most Irish wolfhounds interact very well with families, especially children. This breed has even earned the nickname "The Gentle Giant."

In ancient Ireland only kings and nobles were allowed to have the Irish wolfhound, the amount they could have depended on position. For example, the Filid (who were of the lesser nobility) could have only two hounds. There were plenty of kings and nobles, as ancient Ireland was divided into five sections, each section had a king, and each fifth had numerous kingdoms (there were 150 kingdoms in Ireland).

Patrick McAlpern (later St. Patrick) took care of hundreds of wolfhounds because...
A ship captain agreed to take Patrick McAlpern (later St. Patrick) out of Ireland if he would take care of hundreds of Wolfhounds. This is a very interesting story. Patrick was kidnapped and brought to Ireland when he was very young. Later, a ship captain from France was stealing hundreds of wolfhounds, but the dogs began to become ferocious and cause chaos. He promised to bring Patrick to France if he would calm the dogs on the ship (he also had to feed them and clean up after them). Much of this saint's life was spent with wolfhounds and there are many more stories about them.

Wolfhounds were usually fed biscuits and bread up until the mid 19th century when commercial food for dogs came to be. They would usually soak the bread or biscuits with water or milk. Some dogs also occasionally ate small amounts of meat.

Irish wolfhounds are about the same size as small ponies.. This breed usually weighs between 90 and 150 lbs. It can grow up to 7 feet long and is one of the tallest breeds in the world.

This breed makes a terrible guard dog because its calm, loving nature causes it to greet everyone (including strangers) as friends.

Contrary to popular belief, too much hard exercise (especially involving jumping and jogging) is actually harmful to the Irish Wolfhound puppy since they are easily injured during their growing stage.

Common to the Irish Wolfhound breed are a handful of diseases/ailments including Bloat (which happens when the dog's stomach is filled with air and rotates), bone cancer, cardiomyopathy (or heart disease) and hip dysplasia. Sadly, all of these problems are eventually fatal.

Irish Wolfhounds were used to hunt wolves (not a tough one to guess!). This breed obviously has the speed and strength to kill a wolf, even though now wolfhounds are generally mellow and get along with other animals. They did also hunt elk, but they were not originally bred to do so. The Irish elk stood 6 feet tall at shoulder, but is now extinct.

Welsh folklore tells the story of Gelert, a brave Wolfhound who protected his master’s son when a wolf broke into the house. When the father returns, he sees the dog with blood on his mouth and kills him in a rage. He then finds the baby, safe, next to the body of the dead wolf. A village named Beddgelert (Gelert’s Grave) commemorates the story.

Location: Temecula, CA
We are located in sunny Southern California, wine country; a great place for a vacation.

Want to Purchase a puppy?
Want to purchase a Irish Wolfhound? Please fill out this Questionaire.pdf

About Anarkhos (Dad)
This big guy is the father of the puppies and weighs around 150lbs. These are going to be some big puppies.

About Kalypso (Mom)
This girl is the mother of the puppies and she also weighs around 95lbs.

For Your Happy and Healthy Wolfhound!

Ohhhhh 9 Wolfiesssssssss:
If you are interested in their past 29 day weight chart click here to view a PDF of that. Collection of interesting facts about the amazing Irish Wolfhound breed and useful tips to maintain a healthy and happy Wolfie.Click here for more tips and links 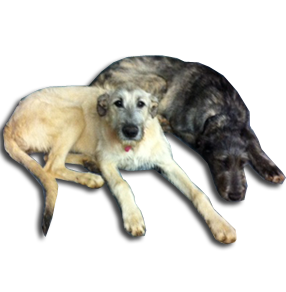 Anarkhos.com is dedicated to Gandalf the Grey

Gandalf was our first Irish Wolfhound. Because of him we fell in love with the breed. Please take a look at our Gandalf page. May he rest in peace...